If you ask me, ‘Is motherhood what you envisioned it to be?’ I would probably just make some weird sound effects and give a shimmying shoulder shrug.

As my own body changed with swelling and shrinking over the recent years, so has my ‘envisioned’ ideas of motherhood. The same can be said for how I envisioned my life, my career, my marriage. Everything is different, harder, easier, messier, better, bigger, smaller, more, less – just so different.

From the time I was pregnant with my first I envisioned that my life was at the beginning of something special.I imagined a series of vibrant pregnancies, dreamy warrior births, quiet nursing naps, homemade everything, lots of craftacular clean fun and kids who were naturally empathetic, logical and happy all!the!time!  I called it New Mom Syndrome and I was riddled with it.

From my first delivery, motherhood wasn’t meeting up with what I had in mind. As a first-time mom I was tense. The first six weeks were the roughest and after that I had a fairly happy, relaxed baby that still did all the ‘baby stuff’ like not sleeping and puking up all the time. I failed to appreciate that babies are babies and babies are tough. I mistakenly thought that if everything wasn’t ‘all good’ then I was doing something wrong.

This was the tension in my mothering. The tension of my envisioned idea of motherhood and my real life.  It was like the two lines were running parallel and never intersecting, I felt like I was constantly trying to force them together 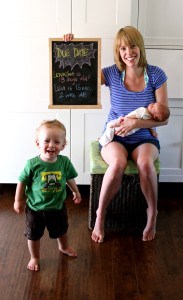 Then my second baby, Lenayah, came 16 months later. In the long run, it was the remedy to my New Mom Syndrome, but not without a cost.

The perceptions I had of my life with kids would bowl me over.  I went from envisioning these grandiose bubblegum ideals of motherhood to now being completely overwhelmed by it all and allowing only for the expectation of an inadequate mother who had to fight for a break. I had a toddler, a higher maintenance baby, a strained marriage, and an anxiety that took over my heart.

It made me feel like everything was slipping from my grip.

I had to let go of all I had envisioned motherhood and marriage to be in order for it to be what it is. 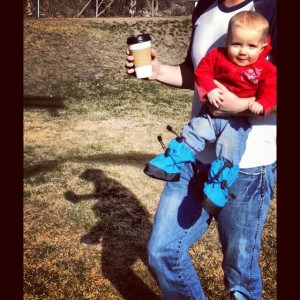 The humbling part would follow as I realized that in order to do this I had to be honest, vulnerable and messy. I had to be honest that motherhood sometimes made(makes) me angry. Honest that the pressure to achieve ‘what I wanted it to be’ wasn’t worth the cost of peace in my home.  I had to be vulnerable with the community that was circling around me offering support. I had to be messy with my marriage, with my home, my time, my resources. I also had to get messy in my own thought processes and push myself beyond my rules, my limits, my comfort zone.

This lead somewhere incredible that I could never have envisioned. Because, in this real-life mothering there are dance parties, waffles for dinner, and though nobody knows where the mop went everyone generally likes being around each other all day, every day.

There is a mom who realized she is capable, stopped dreading and started doing. There is a set of parents who are always trying to communicate with kindness and support each other without resentment (which sure, sounds nice and easy but it’s a daily effort…sometimes hourly, if he is singing the same line to one song over and over and over).

There are three little kids making messes, loving with big emotional hearts and taking the long way around logic. 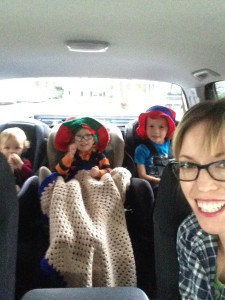 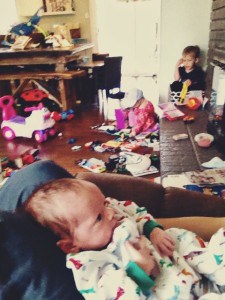 I had to let go of the dreams I had so bigger and better dreams could happen.

I had to make a plan but let God direct my steps. Because his purpose for me is grander than what I can conjure up from the special combination of my fears, my rules, my passions and what I saw Pinterest. I had to be moulded and fired in order to be reshaped for a better purpose, my purpose.

Plus there are waffles and sometimes whiskey…. so things have ended up pretty well. 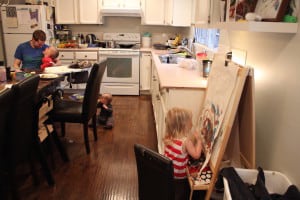 2 thoughts on “Is Motherhood What You Envisioned It To Be?”