From the very first time I let my young adult self be sweetly soaked in liquid courage, I rocked my ish on the dance floor. Even if this was the sober reality: 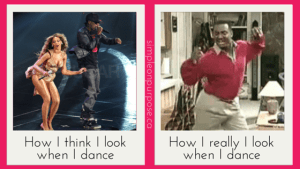 You can call me the whitest Carlton you’ve ever met, I don’t care. There’s song in my heart and I just gotta dance. And by ‘dance’ I mean ‘Be YONCE!’

It was over 11 years ago I first met my husband. That same day we met, we guzzled our Texas Teas, wore belt buckles like the small town BC kids we were and we danced.

Well, he danced, I followed. I had never legit two-stepped before and he knew what he was doing. We were close enough that I could feel the strength of his shoulders, but there was a friendly buffer about the rhythm and pace.

So, like friends, we also sang, without restraint, over each other’s shoulders as we danced.

It was like someone had condensed all the carefree gusto of 19 and packed it into this solid body of a sarcastic smirking boy who was trying to fill the passenger seat of his ’69 Dodge Dart… and I got to dance with him. All night.

Eleven years later I still feel that way when we dance. 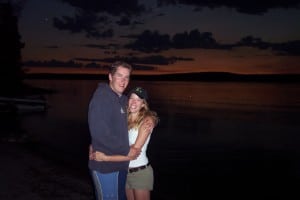 Though now we dance in our kitchen. . . or at that yearly Christmas party, where every detail feels eerily the same from year to year. So, mostly our kitchen.

If you would have asked Teenage Shawna what she imagines in a husband, it definitely included dancing in the kitchen. If you would ask Adult Shawna, it also includes being cut-in on by a blonde-haired, blue-eyed beauty that is three years old.

I have this mental picture of Conor dancing with a tiny Lenayah. We had struggled through her early months to figure out why she was always crying, it wore us down in ways we weren’t proud of. Then as he danced with her one night, she wrapped her whole infant hand around his thumb and just swayed. I remember us choking up. I remember knowing that she had nestled down into that Lenayah-shaped spot in his heart just for her. This might have been the beginning of his inability to ever say ‘No’ to her. 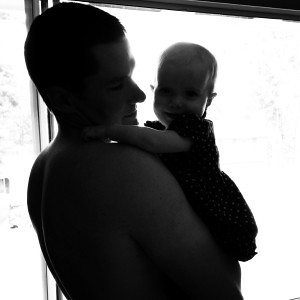 Then there was reluctant Levi. He was slow to take to the music. I would often try to trick him into dancing by beginning with tapping toes and working my way through my whole body, telling him that had to dance and I couldn’t stop!

Now when I see him try to cheer on his brother or sister the same way, I melt into a cuddling puddle of love that moms have for their sons. He didn’t get the Carlton moves though, he mostly Ninja-Dances. Obviously.

And of course, Dawson, the mischievous sweet child, took right to shaking what his mama gave him. Though he has more swagger in his left knee than his spirit-soaked Mom-Yonce has at the most balling Christmas Party. 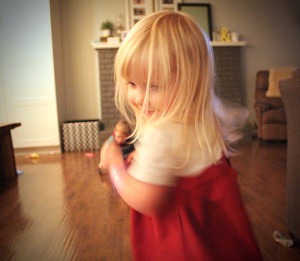 Not a day goes by that the kids don’t ask for ‘their songs’ and we have a dance party in the house. I mean, sure, I still look like Carlton (but tired and in stretchy pants). Instead of a reckless, tender-hearted 19-year-old as my partner, there is a man who I can read like a cherished, memorized book. There are three toddlers who all inherited different parts of his laid-back laughter. Instead of liquid courage, there is coffee. Instead of belt buckles, there are princess dresses, and ninja headbands, and well. . .pajamas.

And we still sing like nobody is listening. All four (and a half) of us, singing different lyrics and mismatched tones to the exact same song.

Something that started out as simple as dancing with a cute guy in a bar turned into me falling head over heels for how he lived and loved. He sang and danced in a crowded bar like he was alone in his kitchen. He grabbed me in his arms and led me along with him. Every day he is still leading me to be freer and bolder and to remember the playlist continues even when this song is over. 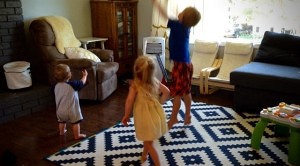 And I look at my kids, and think, ‘yeah, they get it’. I hope they always hold on to it.

Because there is a cure here.

Rules that we impose on living and loving can manifest and restrict our physical movements. Sometimes when you can’t overpower a rotten mindset, and life feels sucky, and all the babies are crying, and you want to convince everyone that they need to be miserable along with you, all you need to do is Shut Up and Dance.

Love Shawna, your Nerdy Girlfriend who thinks she is Beyonce whenever she dances to Salt N Pepa

10 thoughts on “Shut Up and Dance With Me”