Exhaled flatus. That was how my Dad instructed us to say ‘fart’. A word that we would only ever hear from my Grandma, who defiantly read us a book about farts by Robert Munsch. When she would read it, I laughed with that sugary freedom that I was protected by her permission to tango with this word. I was also a little terrified by her rebellion. My father would not approve of this language.

We joke now, about his rules around our language and other ‘Dad’ rules. He shakes his head at his ‘young father of four’ self. Which makes me relax in my own parenting, but also reminds me there will be inevitable ways every parent will screw up in choosing their battles.

One battle he did not fight was the battle of the Happy Jackass. 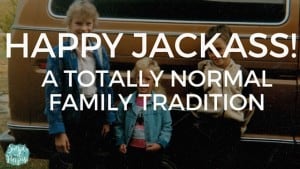 The Happy Jackass was a fruit stand we would drive past on our way from our small Okanagan town to visit relatives on the coast. I can only imagine someone like my Grandma concocting a produce-selling business built around the name ‘Happy Jack Ass’.

I see now, that driving with children can be a lesson in the art of distraction, carefully selected threats and restricting fluids so that nobody has to stop to pee. Ever. My parents had four kids fighting in the back of their unreliable brown Ford van. Four kids separated like war enemies by their preference for windows open/closed/almost open and every other minor detail they can find to disagree on.

So I could imagine that once we were an hour into the trip the desperate need for distractions was at its peak.

Then like rising up the crest of a mountaintop, statuesque and attending, there were almost sun rays beaming straight onto this billboard. A blue donkey kicking its back legs with its mouth agape – half cackle, half bray. Across the sign in big black gimmicky letters were the words ‘Happy Jackass’.

I’m too young to remember the exact details, but I am almost certain it included my older brother seeing this sign and excitedly rattling off every single politically-correct question he could think of that was possibly related to the Happy Jackass. Slipping in the word ‘ass’ with indulgent anarchy, seeing how far he could push the limits. Caving in to the road trip with four kids, the conversation ended with this rule: You can each say the phrase ‘Happy Jackass’ three times and three times only.

Sometimes family traditions are steeped in ritual and religion. Sometimes they are just a free pass to the everyday house rules. Most of our traditions were free passes, like all of us kids piling into their bed on Christmas morn, or choosing what dinner would be on our birthdays, or Friday night treats. It was kind of like our parents were testing the waters of how we would handle more freedom. The festive equivalent of giving a toddler a blaring water hose in an enclosed space where their siblings can’t readily escape.

Each of the four of us would treat this ‘free pass’ differently. Would we shout our ‘happy jack asses’? Maybe whisper them like a sinister mastermind? Would we get zealous and say them all at once, real fast, back to back? Or would we save it! save it! and bring them up over the remainder of the day as a most perfectly timed quip shocking all unsuspecting onlookers who weren’t ‘in’ on the rule?  I’d lie if I said I didn’t entertain my ‘good girl syndrome’ and resign myself to the mature option, denying myself from lowering my vocabulary standards for cheap thrills.

But it was tradition. You have to say Happy Jackass. You have to say it three times. If you don’t you are shunned by your siblings and they will make you pay if you ever try to make them look bad. Sibling rules 101.

Over the years I would try on different approaches. I would span the entire emotional spectrum from laughing maniacally while squealing ‘happy jackasssssss!!’ in my parents’ ear to feeling disappointed that I was ruining my goodie two shoes track record. Leaving me softly sobbing on the hard brown bench seats while eeking out ‘happy jacka–hs’ and hoping nobody would call me on doing it two more times.

These trips would eventually end with our van breaking down on the side of the road or us making it to our destination, spilling out into my aunt’s driveway. All of us gasping for air trying to escape my oldest sister’s eye rolls, my older brother’s exhaled flatus, my car sickness and my little sisters protests over window ventilation. It was rare someone held their ‘Happy Jack Ass’ for later that day and we went about our trip not mentioning the tradition.

This post is part of a Round Robin on childhood traditions.

Louise at Talk Nerdy To Me

Sarah at Sarah on Purpose