This has always been my view on running…. 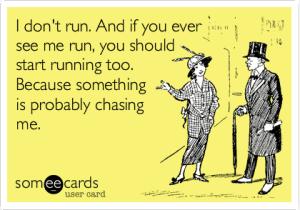 I’ve also managed to keep my gym going to a minimum, read zero, by asking friends if they mean  the ‘Guy-em’ when they invite me along…. 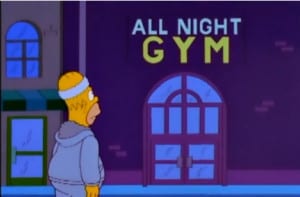 I mean, who wants to go to the gym with a girl who has never even completed the high jump; has the upper body strength of a five year old; and doesn’t even own a legit pair of running shoes. One thing is true, I will make you look extra sporty and buff when I get caught up in the benchpressing machine (see! I don’t even know if that’s a real thing, I’m just making stuff up already!!).

Okay, so you get the point. Me, not so fit. Never have been. And gyms? Well, public displays of exercise are appealing to me as that watching a spin off show of Julie Taylor from Friday Night Lights. So, never ever at all ever.

But I’ve started running (in public).

I even signed up for the Foam Fest 5km race with some dear friends.

It all started when I got a message from my sweet mom friend asking if I wanted to sign up for a 5Km with her, and that my sister (scoff, Rachel) said I might be into it. Oh, I laughed and laughed.

Then I stopped laughing and said….crap. See, I had been praying for God to show me ways to support my friend who lived in another town. Running a 5k with her was not what I had in mind, but we all know God asks us to step out of our comfort zone. So, I clicked on the race link and watched what it was about. Bad News, I have to train for a 5k. Good News, if I’m going to run any race, this looks like the best one (with the best team possible).

My husband was speechless when I told him I was planning to sign up for this race. Which is rare for him not to have some sarcastic quip. Eventually he said, ‘I love this, but…..with respect….I don’t think you will do it’. To which I replied ‘I know, right?!?…..but I’ve got to’. So we both signed up the same afternoon along with more recruited friends to form a team. Then I searched the house for anything that would pass as running shoes….. 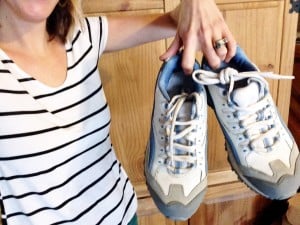 I’m aware these barely pass as ‘running shoes’ and have been the subject of many jokes. Go on, judge away, but they are getting me where I need to go for now. Which is to uncertain bodily injury and public humiliation! Because who signs up to do a 5km without ever running a day in their life!!

Okay, enough with the dramatics. I’ve committed, downloaded the couch to 5k app and have started to run and do some rookie fitness workouts on youtube.  I will make it to the finish line this summer, I will run alongside people who have stood by my side for many years. I will celebrate with them for a whole weekend while we all gather for this race. Then who knows! Maybe I will take up running…for fun…..and I laughed and laughed.