The Type 8 is also known as the Maverick – they are confident, assertive and make natural leaders.
Today I have three Type 8 moms sharing how their Enneagram type empowers them in their motherhood and how it shows up in stress.

To open up I share some details on the Type 8:

Thank you to the moms who shared what their experience is as Type 8 moms – Stacie, Ellen and Melissa.

You can find Melissa at Live with Audacity

Join the Simple on Purpose Community to ask your questions around the enneagram and livng simple, on purpose.

If you can’t click links in these show notes then head to www.simpleonpurpose.ca and click LISTEN, you can find all the show notes and episode transcripts there. 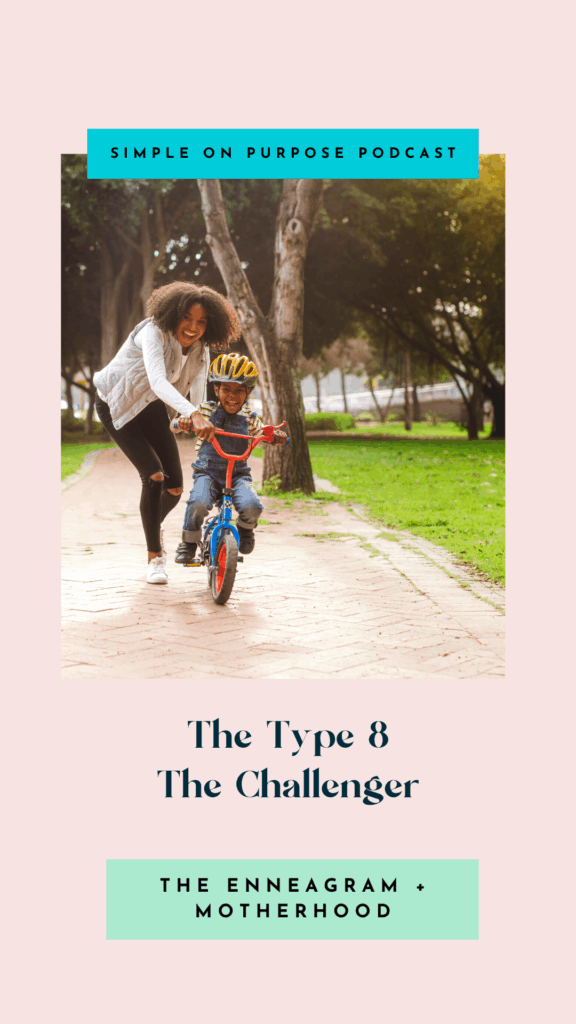 So simple on purpose is a place where I want to help you simplify your home, your heart, your life, to slow down and show up for the things that really matter the most to you the things that you want to place the highest value on in your life.

We’ve been covering a series on the enneagram, which is a self-discovery tool that looks at our inner motives. So lots of personality profiling will look at your outer behaviours and other qualities and other actions. But the enneagram takes us deeper, and it’s looking at the things that are driving us. So we’ve been covering all of the types of the enneagram and hearing from mums, who are sharing a couple minutes on their experience of what it’s like to be that type how their type empowers them, and how their type shows up under stress.

When the type eight is in a place of growth and health. They move towards the qualities of a type to the helper. So they shift their energy towards caring, they become more tender-hearted, which can really feel vulnerable and scary to a type eight. But it allows them to show up to support to connect with others from a place of generosity and respect.

When they are in a place of stress. They move towards the type five, the observer, things get overwhelming. They retreat, they strategize. They’re collecting information and just trying to sort things out on how they can come back into the situation. If they stay in this place, they can probably become high strung and stop taking good care of themselves and their needs.

I’ve also been sharing harmonic groups, and this is categorizing each of the enneagram types into different ways that they handle things when they don’t go their way. The type eight is part of the reactive group, they want to express how they are feeling and measure the response of others. The type eight will want to express their powerful energy as a way to say that they’re angry, something’s wrong and also as a way of keeping their guard up, keeping a distance and avoid relying or becoming dependent on other people.

Now I know a handful of type eights, and I think they are a beautiful source of energy in the world. Their ability to tolerate emotions, especially ones that I as a type nine struggle with. It challenges me and inspires me. And we live in this culture that accepts a lot of Type A energy from men, but our culture I’m speaking specifically North American – Canadian culture even – is that our culture is slow to see that a type eight woman is an effective leader and I really don’t think God makes people by mistake. I think he’s given us this type a woman to help us as a women see what it’s like to embody confidence, to serve generously to seek justice to get things done and to speak truth.

And like all types when the type eight is operating from a place of truth and love. They are magic.

So let’s hear now from Melissa, Stacie and Ellen.

Hello, my name is Stacie, I live in Snohomish, Washington just north of Seattle. We have four children, three girls and a boy ages 12,10, eight and five. The younger three are about to have birthdays and age up. So we have moved out of baby and toddler phase and we are almost a teenager phase. I am an enneagram eight with a strong wing seven. I feel like my personality empowers me. When we have hard things to do. We get it done and I make sure that we get it done. My kids can expect some brutal if you will honesty for me, I will always tell them exactly the way things are and how things will go that can of course go the other way into being too harsh. So I would say that is the downside of where things take us and stress. My wings seven I think really helps keep things light and fun as much as I like structure and getting stuff done. That seven part of me really likes spontaneity and fun, and so I’m able to balance in that way. Alright, thanks so much for letting me share.

Hey, Shawna, it’s Melissa Stewart, I just wanted to first start off by saying, thank you so much for this opportunity to kind of talk about how the Enneagram shows up in my parenting. I am Melissa, and I am a mom to four kids, they are aged 21 18,12, and six and a half. three boys are the oldest and then the baby is a girl. And I am an enneagram 8w7. And I think the way that this shows up in my parenting is that so as a challenger, I feel like I can kind of see when my kids are trying to manipulate me or get one over on me, because I’m like, Huh, I don’t think so. And I really like to not like I really try to see all sides of the coin and try to challenge what is right in front of me. But as you know, the wing seven with the enthusiasm part, I also think that that brings in a bit of spontaneity and fun in my parenting. And so while Yes, I’m a challenger and disciplinarian, I also like to balance that out with, you know, having a lot of fun and just taking off for a day to go to the beach, or something like that. Because I think that creating those memories, and those memorable days and moments with our families with our children are so important. When I look back on my childhood, like those are the, those were the best days. So while I am kind of a stickler for following rules and, and making sure that I’m not being played, I also want to have fun with my family. So I think that’s how the inia gram shows up for me, and my parenting.

I’m Ellen, I am a mom of three boys, nine, four, and almost three, I am an enneagram eight. This was really interesting for me to think about how the enneagram relates to me, as a mom, I often apply the enneagram to my marriage relationship. I think about it frequently in terms of my career. But I don’t think that I have thought about it a whole lot how it impacts me as a mom, I think being an eight in the gut triad, one of the strengths that I have is really being able to empathize, especially with younger children. When my boys have been in the toddler years, and kind of preschool years, and helping them to identify the really strong, overwhelming emotions that they have, that’s easy for me to see and have patience for. The double-edged sword of that is that I can sometimes lose my temper or not have control over my emotions and can make for a chaotic situation. But for the most part, I think that it really has been a strength to be able to relate to them in that way. And I think that it’s also an interesting dynamic as an eight as a woman that can sometimes be tricky to navigate the world, having three boys has made for an interesting dynamic. And but I really think it’s a strength, I hope to instil some of my values of independence and resiliency and toughness, and initiative. I hope to instil those things in my boys. But I also am glad for the opportunity for them to see those reflected in me as a woman that is their mother and can see two sides of that too, that I’m nurturing and sometimes tender, sometimes not. So yeah, that’s being an EIGHT and a mom for me.

Thank you, ladies for sharing your journey and your observations of how your type shows up in motherhood.

Ellen mentioned the gut triad. So the enneagram has nine types and they’re often grouped into different groups of three depending on what they do. So these are always called triads, grouping them into triads and the center of intelligence triads is what the gut triad belongs to.

So we’ve got the nine types. And they’ve been grouped into three triads, three of them. And each, we call them their centers of intelligence. They’re making decisions based on their intuition, their gut, their emotions, the heart triad, that their thoughts, the head triad.

The types eight, nine and one are in the gut triad, meaning they’re showing up in the world in relation to what their gut emotion is doing for them, mainly the gut emotion, they experience and have a relationship with his anger. And not to say that they’re all angry, we know that isn’t true. Depending on the number of whatever triad you are in, you’re going to externalize the way you show up, internalize it or repress it.

The head triad, the type Five, six, and seven, they’re in their head, they’re relying on their mental faculties to help them show up and engage with the world.

But this is just to elaborate that the type eight is someone who can use anger as an energy source to take action. They’re not afraid of anger, like a type nine might be and they’re not internalizing it like a type one would be. So that’s just another layer of the enneagram. And I just wanted to share that with you if that’s something you wanted to dig a little deeper into.

If you have questions about it. Come into the Facebook community group. I do live q&a is there every week. I would love it if you would join us there and you can get supported there. ask any questions you have about simple on purpose living for you. Alright, we’re gonna wrap up with the type nine