Alternate title: Why is Four So F-ing Hard. 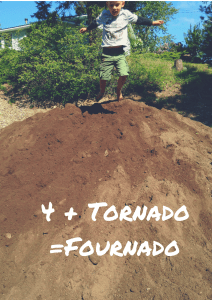 When I first had Levi I was so overwhelmed by this new little baby. Everyone cooed about enjoying the newborn stage. I thought they had momnesia about how hard it really was.

I was constantly craning my neck forward in an effort to reach the next milestone. Sleep more, talk more, walk more, eat more, play more. Constantly trying to ‘level up’ his the independence factor so I could just get a break from all his needs.

Classic overwhelmed mom status. Regardless that I’m kinda combo spaz and slow learner, he was such a happy, compliant, and independent toddler. We have joked to the point it’s not even a joke anymore – that he taught us nothing about parenting. (Lenayah gave us that crash course). He had been easy to parent. We had this gentle, carefree kind of bond between us.

But then he turned four.

There’s names for this stage: Fournado, F-ing Four, Why they call it FOUR letter word.

There was such an ease with him before. Almost like we’ve been leisurely edging a roller coaster up the track to reach that tall, tall peak. Then four! And now we’ve crested the highest ridge and are plummeting down, spiralling unexpectedly, and randomly zinging every way. I can’t figure it out and as I feel about most carnival rides, I hate it. I just want to go eat mini donuts and play skeetball.

With four comes ‘I won’t do it!’ and outright defiance of any request. It’s the stereotypical aggression they say comes from boys as they tear through the house. The boundless energy as they spring out of bed in the morning and ping around like an aimless ball in a pinball machine. It’s the way he looks at me like he’s so angry with my rules but can’t even put it into words because his brain just can’t put this all together. It is: ‘Me! Now! Why Not!? Why? Huh? What’d you say? No, I will anyways!’ There is no emergency off switch when he’s got his heart set on 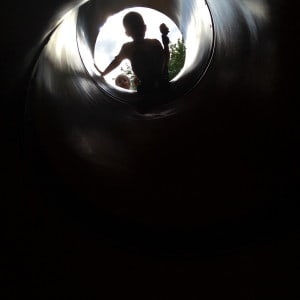 something. He literally told me yesterday ‘Mom, I’m just gonna follow you everywhere and ask you when I can have grapes.’

Now the days seem like a constant power struggle with his need to figure it out, do it all, be it all and the necessity of me to keep him safe, learning, disciplined.  I really wrestle between teaching him obedience, but not blind submission. Making him independent and confident, but not self-ruling. Teaching him the value of his ‘no’ and to challenge things he doesn’t believe in, but not a household anarchist. Most of all, to parent him with grace and second chances without becoming a pushover or enabler. I find myself probably swinging to the opposite in a gut reaction to prevent this.

It’s clear I’m feeling pretty clueless. I know I’m the parent and I should be the one steering this ship away from the iceberg. After all, unlike a toddler, I supposedly have a fully formed and functioning brain. Even if I’ve burnt out the majority of brain cells binge watching the Real Housewives and Millionaire Matchmaker.

So I’m doing all I know how to do. I’m cuddling up to him when it’s time to go to bed and rolling the track I want him to hear on repeat in his heart. ‘He is special to me. He’s so helpful, and smart, and fun, and so so fast. Tomorrow we can try again.’ To which he says, ‘ Yeah, I will not listen one more time, then I will listen’. And I don’t really know what this means but I’m grasping any shot I have at not spending tomorrow with clenched teeth and the futile efforts of counting to three. Let alone all the ‘intentional parenting‘ I’ve been trying to nail down.

And in true Lady Nerd fashion I’ve also been googling four year olds. Turns out this is a total legit thing and most of it has to do with the stage of brain development they are at.  I’ve come to the conclusion that I can handle the F-ing Fours in the following ways:

1. Try these tips on ‘Handling the Fournado‘,

2.  Blame teething, which I was hoping would be a viable scapegoat into the preteen years. But noooooooo!

3. Find the ‘Dinosaur Costume‘ (the proverbial source of their irrational lawlessness) and destroy said item. It might be his helmet….research is pending…. 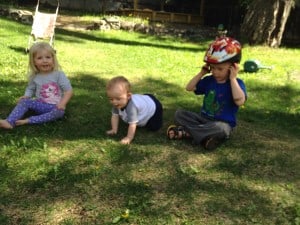 Love Shawna,  Your nerdy mom friend who is appreciatively seeking any parenting advice and a good recipe for summer salads.

Don’t forget that the Reader Feedback Survey is still open for your anonymous comments. I’d love to hear from you.

If you want more day to day momlife, shameless selfies and me talking about cheese then let’s link up on Instagram (right now I have a free giveaway for a large Swing & Spin)