Before I ever considered myself a ‘minimalist’ I had some notions about what the word meant.

It meant someone who lives in an almost empty house. Their home is clad in white and stainless steel and dotted with chairs and furniture that have clean asymmetrical lines. They are probably well-off and they spend their money on only the best items.

As I began the process of decluttering my home I devoured videos and blogs and podcasts by self-proclaimed minimalists. I started to see the wide spectrum of lifestyles that fall into the minimalist category.

There are many mindsets that someone can approach minimalism with. In my scientific analysis of youtube videos, I have found there are a handful of ‘minimalist types’ that I came across. (Of course, I know, don’t put labels on people, blah blah blah. Well, you might be one of these types or you might be more than one, consider yourself OUT of the box!).

ONE The Frugal Minimalist

They reuse yogurt containers, they sew old bedsheets into curtains, they grow their own food.

They aren’t worried about the latest fads and products.

Check out this adorable couple who I consider frugal minimalists, check out minute 5:50 where they talk about their sunhats.

The Green Minimalist is one who is filling their home and life with environmentally sustainable products.

They may be frugal – reusing and repurposing items.

They might also shell out cash for eco-friendly products on quality products that will last longer.

These are the minimalists who aren’t producing waste and spending mindlessly.

The Green Minimalist is probably not someone you find filling a basket in the dollar store with trinkets that will end up in a landfill. They are more likely at a place like the Soap Dispensary and Thred Up, buying second hand, buying quality, and buying things that reduce the amount of waste in our world.

The Nomad Minimalist is the minimalist who lives out of a backpack/tiny temporary space.

Their journey to minimalism commonly begins with them living minimally while backpacking the world.

Their clothes are versatile, they only keep their most cherished possessions at hand, and they know the value of a really good pair of shoes.

For some Nomad Minimalists, it is a challenge to see how little they can live with. For some, it is just a practical way to travel around. Quite often they have a home base storage of their most prized keepsakes.

The Aesthetic Minimalist is someone who may or may not be focused on reducing their possessions but does aim for a clear and clutter-free living space.

They find a lot of peace in a very tidy home and do their best to keep possessions to a minimum or they store them away wisely to keep them out of sight.

The MiniMUST is a term I use for the minimalist who is constantly challenging themselves to live with less and less.

A Minimust might also be called an extreme minimalist and join in challenges to reduce the number of items they have.

I liked this challenge where she packed up all her extra belongings and lived as an ‘extreme minimalist’ for a month.

The Gradual Minimalist is someone who is aware that they currently have too much stuff and they want to take steps to declutter.

Their focus is on getting rid of the excess that is in their home.

Their reasoning for decluttering is more about the physical hassle of ‘stuff’ and even more so the emotional burden of clutter.

I think for many in Gradual Minimalism, their end goal is to have the home of the ‘Aesthetic Minimalist’, but their struggle is on keeping clutter from coming back into the home.

You might not see a lot of videos from gradual minimalists because they are such a work in progress that their home probably doesn’t look ‘minimized’.

I most identify with this type of minimalist and I think many other moms do as well. For me, I feel like it is taking years to choose how minimalism will look in our house and shifting with my family’s needs and lifestyle BUT it is happening and that is what counts. I don’t have a video for this one, but I do have this landing page of posts about simplifying your home

Minimalism looks a little different for everyone, and sometimes the reasons you start are not the reasons you keep going. No matter the reason someone becomes a minimalist, the result is a mindset of ‘the less you own, the less owns you’.

Are there any other ‘minimalist types’ you would add to this list? Is there a type you most identify with? I’d love to hear from you! 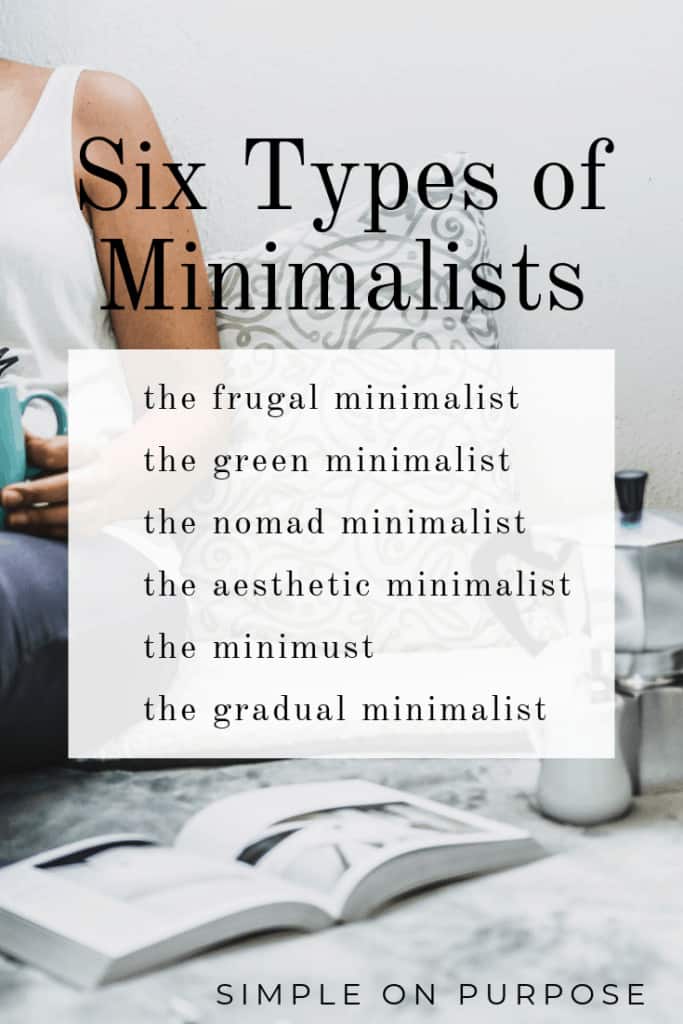 8 thoughts on “Six Types of Minimalists”