We live in your typical split entry home, aka BC box as it is called here in British Columbia.

By all accounts, our home is big enough for us, we are a family of five in roughly 2000 square feet of mid-range living.

But the house felt cramped with how we were using it.

When we moved in here about 10 years ago, our basement was known as ‘where air goes to die’, ‘where the laundry lives’ and ‘perpetual storage’.

If you have been around this site, you have seen pics like this of our basement. 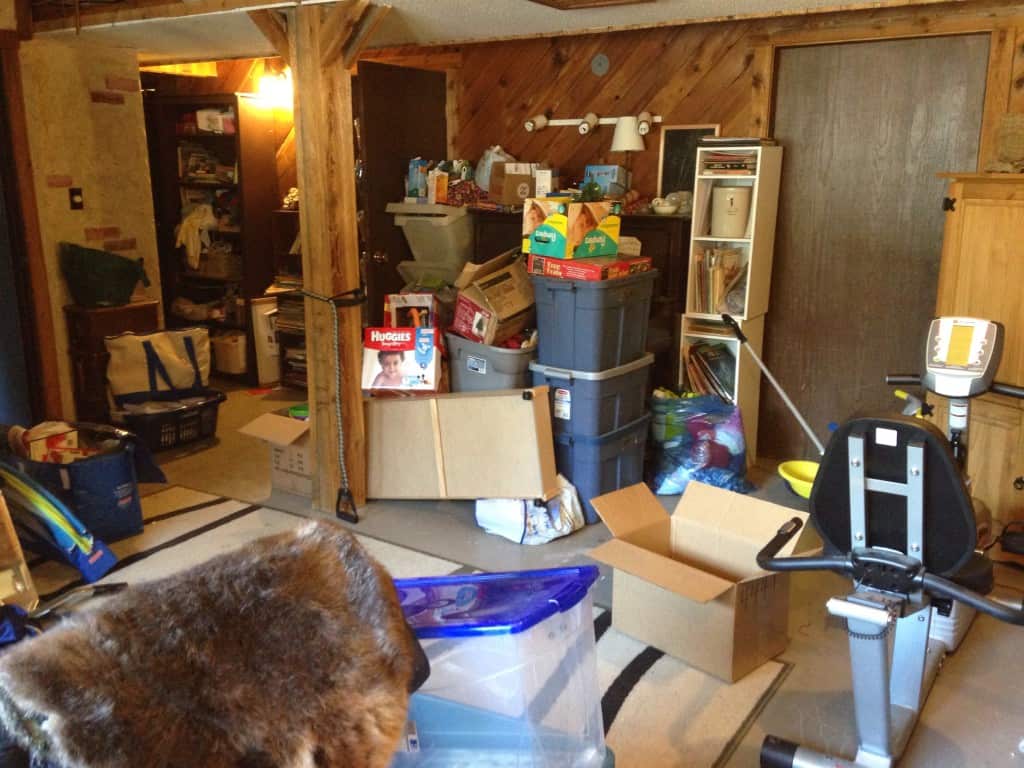 Once I learned about decluttering, the basement was my first target.

At first, I was fueled by this manic knowledge that ‘I DIDN’T ACTUALLY NEED TO OWN ALL OF THIS STUFF’.

It was like permission to get rid of things I really didn’t want or use. 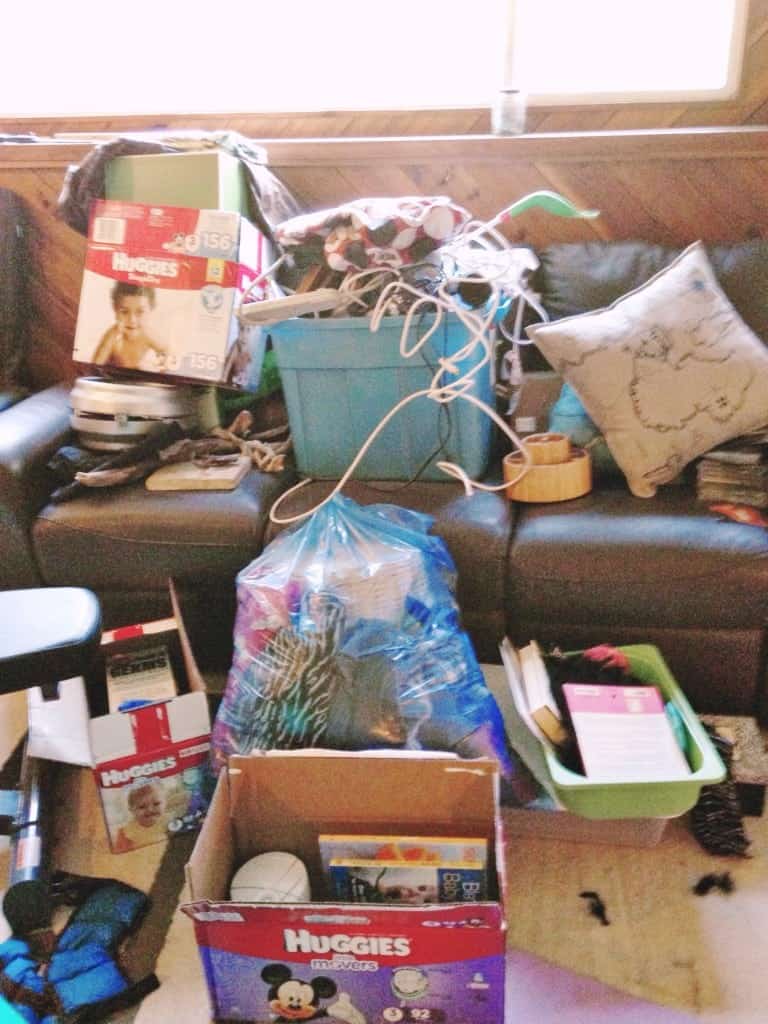 Then decluttering became about the vision I had for our home.

WHAT DID I WANT MY HOME TO BE? 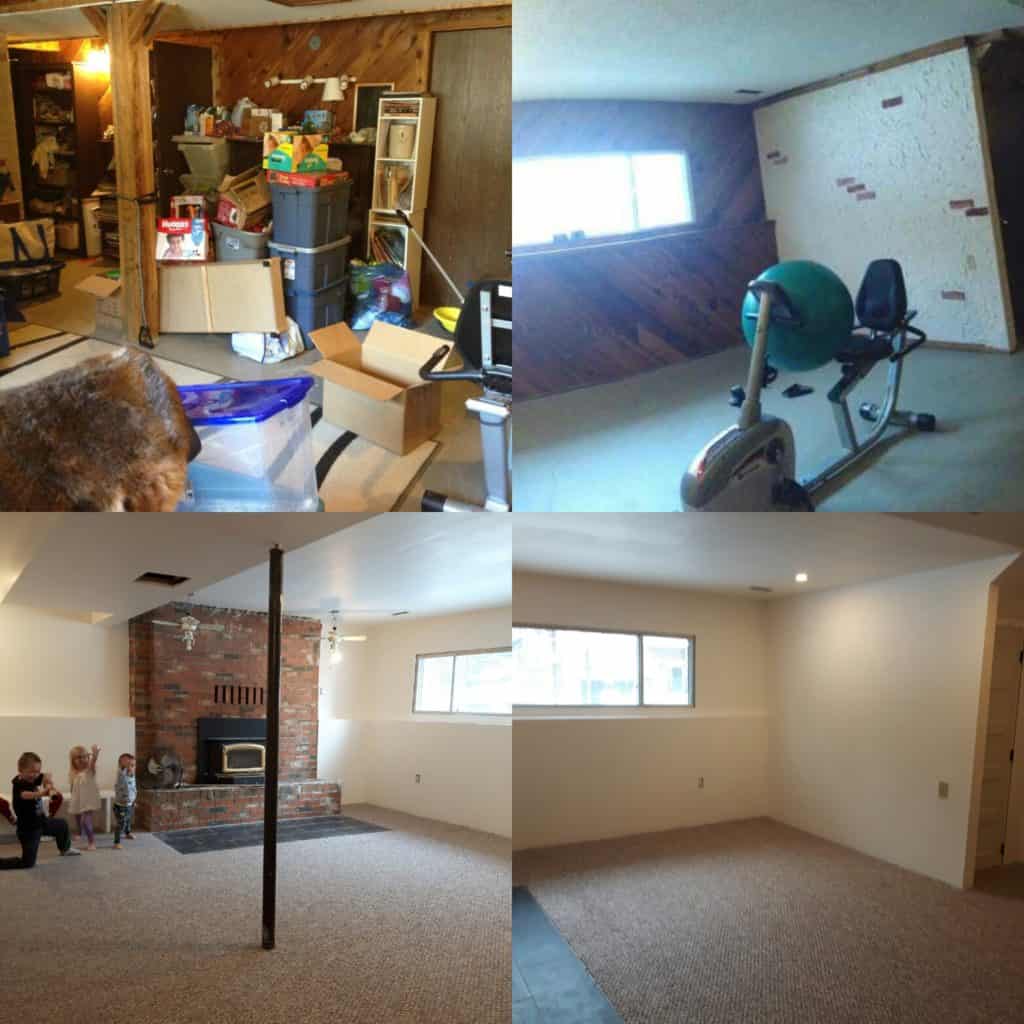 These visions prompted us to do renovations like: a playroom space with built-in fort in our basement, to redo our daughter’s room for her birthday, and to make a bright and lovely office/creative space where I could work and we could gather as a family. . . . 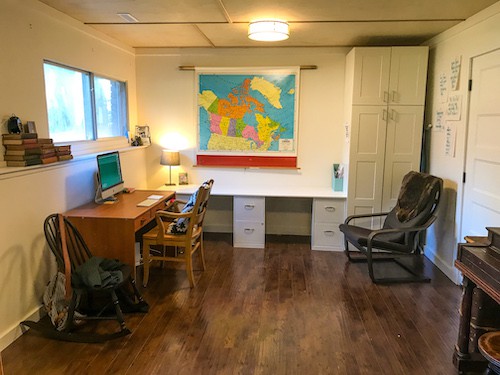 A few months back we all piled into my office. ⠀⠀⠀⠀⠀⠀⠀⠀⠀ The younger kids decorated their boxes for scout camp. Conor and Levi looked up music. I printed off worksheets. There was random piano serenades. There was craft supplies and glue and paint everywhere. ⠀⠀⠀⠀⠀⠀⠀⠀⠀ And it made me so happy! THIS is how we wanted to USE our space. I always talk about having a vision for your space and how you want it to serve you and your family. So when you are decluttering, you are working TOWARDS this vision. ⠀⠀⠀⠀⠀⠀⠀⠀⠀ This is our ‘creative’ space where we can do projects and hear piano concertos, and pull out supplies and get messy. ⠀⠀⠀⠀⠀⠀⠀⠀⠀ This room has come a long way from the storage facility it used to be! ⠀⠀⠀⠀⠀⠀⠀⠀⠀ If you want to read more about decluttering and simplifying your home, check out all the posts right here https://simpleonpurpose.ca/simplify-your-home/ ⠀⠀⠀⠀⠀⠀⠀⠀

But something wasn’t working.

My oldest was really craving his own space where he could play and organize his things and just be on his own. As someone who appreciates all of these things too, I knew how important it would be to give him this.

So we started tossing out all the ideas on how to make a third bedroom work.

In the end, it was looking like we would split my amazing Work Lady space.

After all, it was two rooms to begin with, and the previous owners tore down the wall.

We knew this reno would be easy in terms of light switches and door entries.  But we have also done enough renos to know ‘building a wall’ would ripple out to affect the rest of the house. 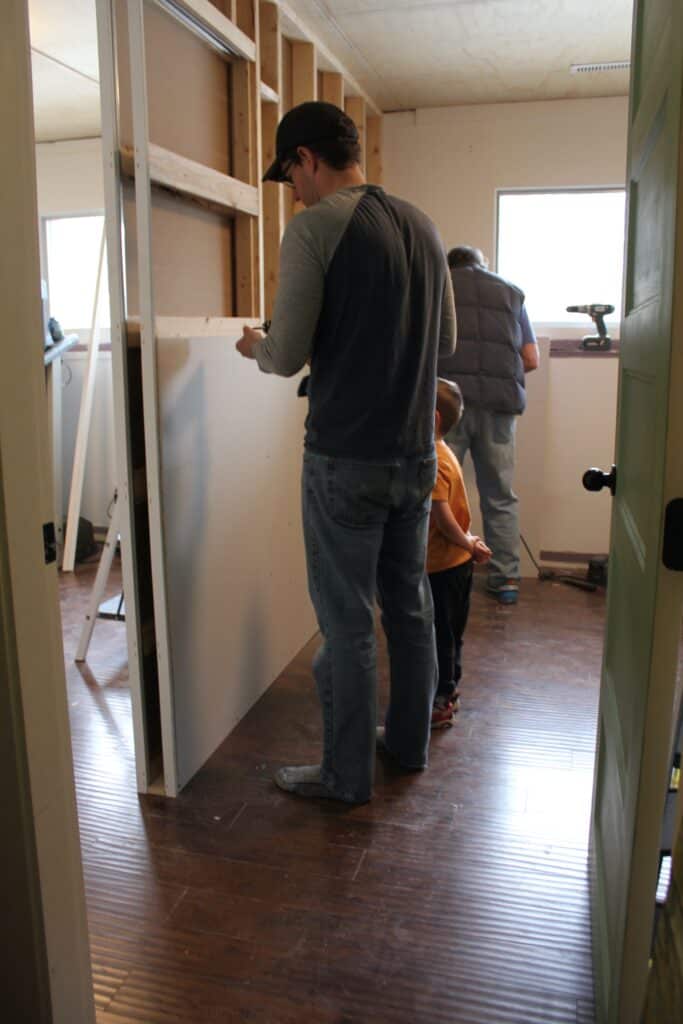 In the end, we built the two rooms downstairs, moved our youngest into his sister’s old room, and moved my office upstairs. 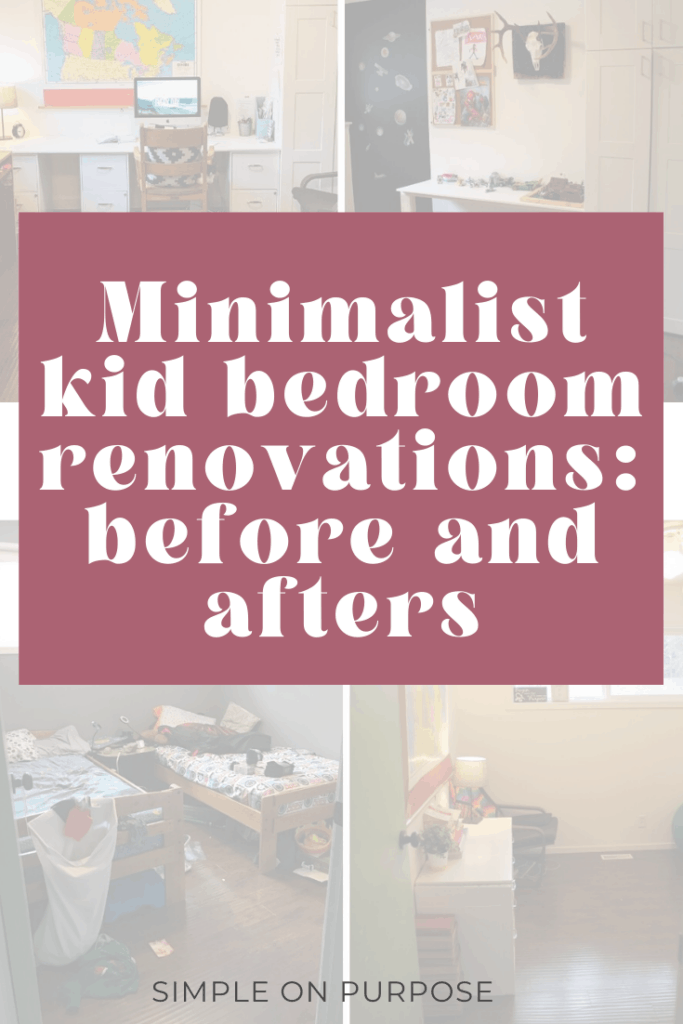 Here are the before and after photos of the rooms we renovated this past month.

The boys shared room is now my office 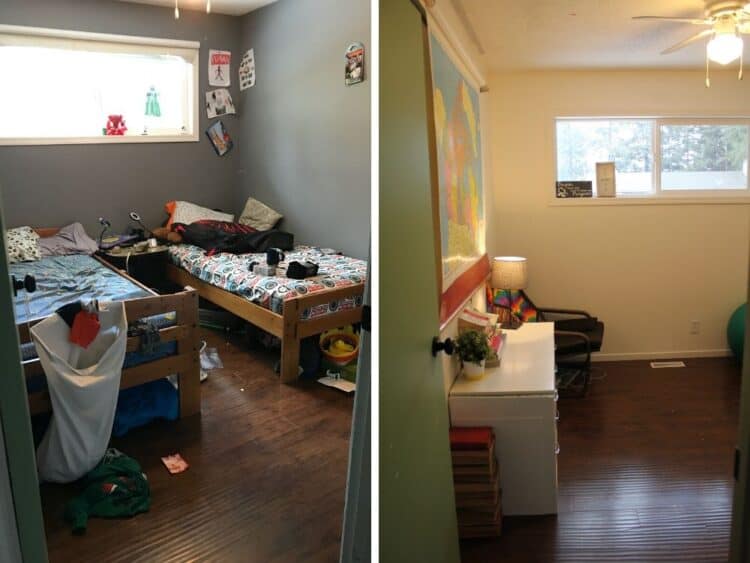 My daughter’s old room is now my youngest son’s room – there is a little desk to the right for all his legos. 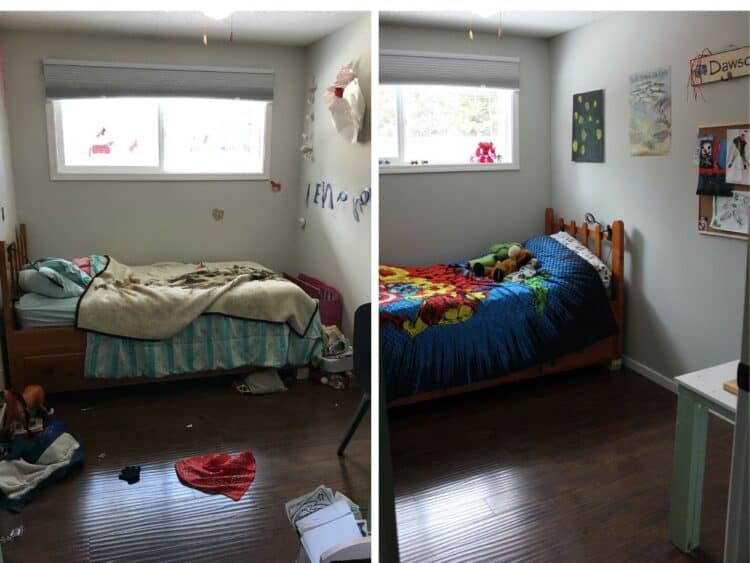 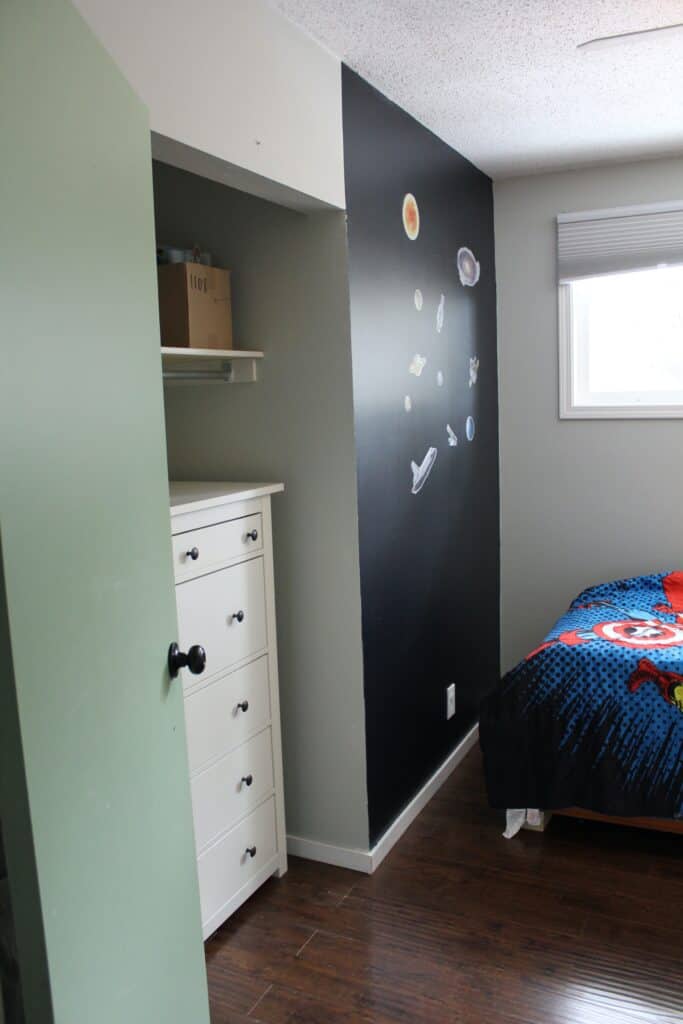 My office space is now my oldest’s room. These cabinets were too heavy to move out (and bolted into the wall), so this is where his clothes and toys are. 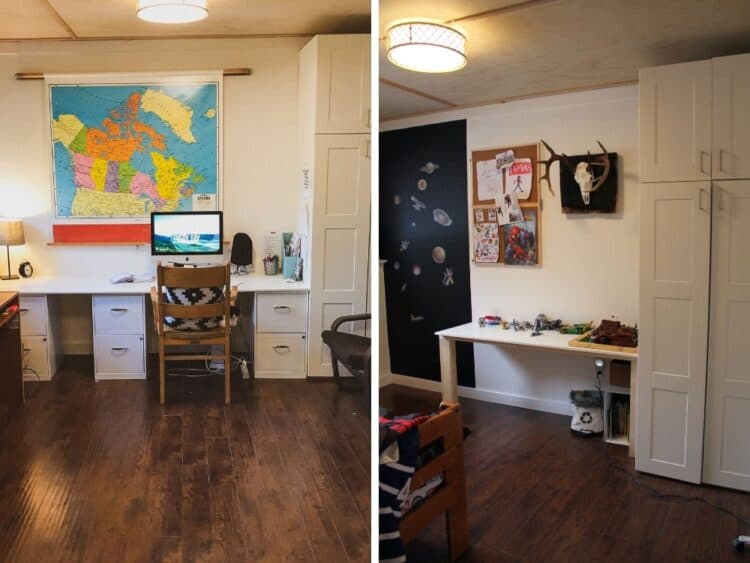 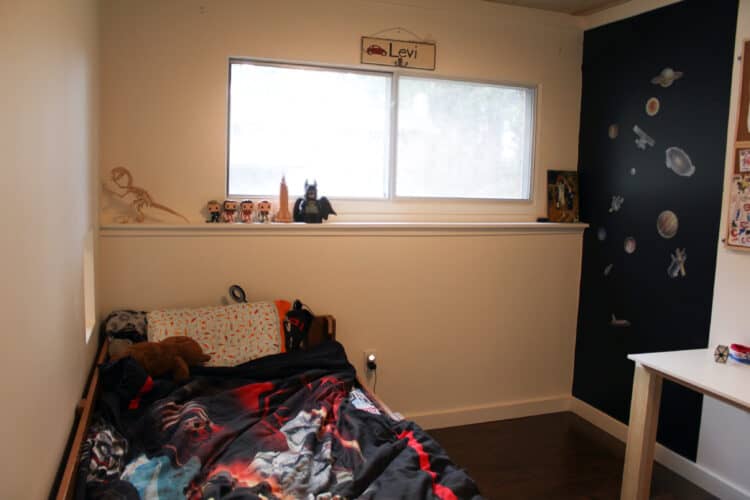 The creative/exercise part of my office is my daughter’s room – so creativity still is the theme here! 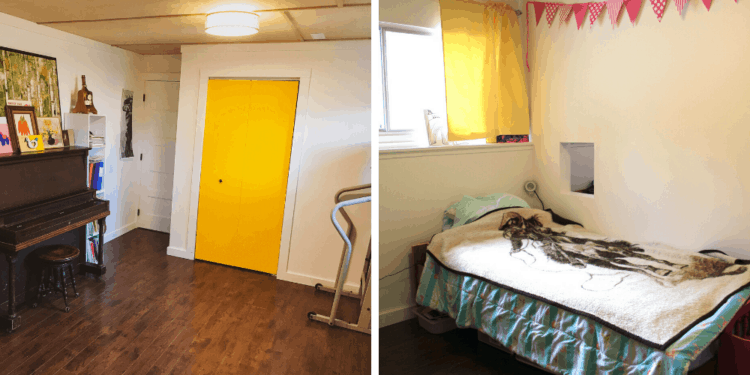 We made this little passthrough beside the beds because my son requested that he be able to talk to his sister at night.

Eventually, we will put little doors on them, but right now they crawl through them and throw stuffies at one another til they fall asleep. 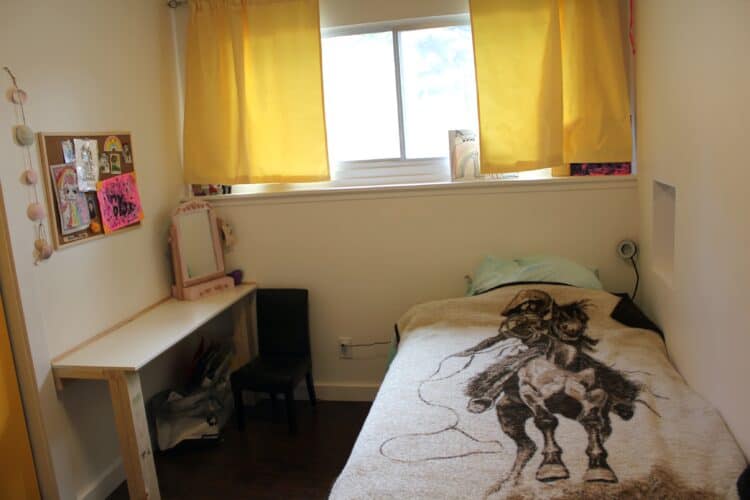 We still have some manoeuvring left to do with the piano and the treadmill that we took out of this space.

But everyone is thrilled to have their own space and I even caught my youngest making his bed two consecutive days in a row!