So this time one year ago I decided I wanted to purge the house. Room by room, drawer by drawer, I began getting rid of things that I didn’t find useful, beautiful, or sentimental. Turns out this is like really hard and stuff because it means finding the time to do it, sorting everything into sensical piles then transporting these piles to new homes, and well, letting go of stuff.

Right before we started to comb through all our possessions I took pictures of my house. I photographed every room and corner in our house, as it was (spoiler alert, it was messy. second spoiler alert, it usually is)

Six months into purging I wanted to blow up the internet with our incredible before and afters. We had gotten rid of TRUCKLOADS of stuff, but then we looked at photos and couldn’t tell the difference! The truckloads of stuff we had purged wasn’t translating into photos, showing all the hard work of simplifying that we had done. I think it is because as one area became clean, it got transformed into a new form of storage or new use of space. Things were going, but things were constantly shifting

Of course, as I’ve spent the past year decluttering. I have been learning a lot, particularly that minimalism is a process. It is a tandem change of surroundings and lifestyle and that comes in different paces and forms for each person.

When I started out, I had expectations that I would achieve what I saw everyone else showcasing on the internet. I craved that simplicity of a near empty house where the children had one cherished toy, we cooked everything in a heritage ceramic baker and we wore lots of white linen. Or grey linen too.

Then I remembered this wasn’t how our family rolls and we’ve been working on how minimalism will look for us.

So now a year later, I’m going to post some before and afters.  I know it’s kinda weird to post pics of your regular ole home online, especially for those of you who come here often – this post will be slightly unimpressive. BUT I want to post my before and afters, a year later. Not because they are awesome, but because I am proud of the work we have done – even if it isn’t distinctly different. Also, because this is just plain real life. We don’t live with one set of dishes each or ten items of clothes each. We have stuff, and now that we feel like less of it is ‘clutter’ – we use our stuff, we think about our stuff, we try to make places for it in our home – rather than making a place for us in our home.

So, here is my home now, a minimalist home for a family of five, a work in progress. . . .as is. Ok, maybe I did the dishes and threw the pillows back on the couch – so I could impress you with my domestication domination.

So I’m sure by now you are thinking things kinda look the same, but tidier. Good point. It is pretty tough to ‘minimize’ the living room, aside from taking furniture out. But since we use everything here, we’ve kept the living room mostly the same. Sometimes we even tower some laundry baskets in the corner for added ambiance.

You’re probably even on to me that I didn’t actually do the dishes, but just hid them all in the sink. I think that a kitchen that has cleared counters is a dream come true, but that doesn’t happen often around here because that’s not our real life. I’ve heard of families that pack up all their dishes except one set and this helps them to make sure the dishes are always done . . . maybe one day we will get there, like when the kids are old enough to wash their own dishes.

Some things we’ve gotten rid of in the kitchen are things like: extra travel cups, extra pans, baking sheets, measuring stuff, all our drinking glasses (we just use mugs or wine glasses), anything mismatched or broken, and a few appliances. We still have a lot of small appliances, never enough teaspoons and I’m hoarding used glass jars like they are made out of crystalized unicorn tears (I don’t know why but I can’t stop!). So I’d say the kitchen still looks pretty much the same despite the purging (and we are A-OK with that!).

The kids’ rooms had some furniture rearranging and notable toy purging/organizing. It seems they rarely play in their rooms though, which means more mess in the living room but less in their rooms. 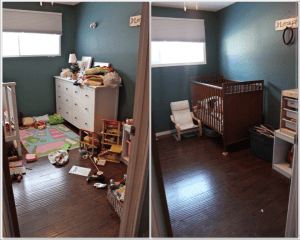 The boys’ room is a little cramped with a crib, bed and two dressers. I hope to move a dresser out into my room and eventually get bunk beds. For now, Dawson is just happy he no longer lives in our room/hallway like he did for the first half of his life. 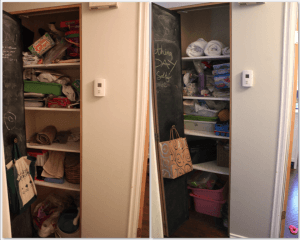 Of all the purging and organizing, this cupboard remains my personal triumph. Mostly because I finally cleaned out all the rogue toilet paper rolls, fondue pot, bins of miscellaneous items and weird pokey outy items that prevented the door from shutting properly.  It’s weird how we have these little pockets of clutter in our house that we keep cramming stuff into even when the door won’t shut. I mean, if this is our closets, what is happening in our hearts? Right? (Too far, not far enough).

Our bedroom looks a bit different without a baby living in it. Too bad that half-hung gallery wall is still yet to be finished. But look at the closet!

Purging the bedroom closet has been one of my biggest undertakings of the year. I have been working on a capsule wardrobe, that is fewer clothes that I love to wear rather than a closet full of things I feel so-so and ‘distraught-emoji-face’ about. This capsule wardrobe has become a thang, I’m trying to get rid of more clothes all the time. If I try on something that I feel so-so about, doesn’t fit me anymore or doesn’t flatter me I will toss it into a bag I keep in the closet. I’m even working up to getting rid of this tall second dresser in our room and replacing it with Levi’s little one. It should help clear up some space for fashion show dance parties and it will be a challenge to force me to purge my clothes even further.

So! This is our upstairs living space, where we spend most all of our waking hours together (at least until we are done basement renos). I know it looks like not much has changed. But the thrift store sorters, dump workers, friends who acquired handmedowns and the seven people who attended our garage sale can attest to the purging our house has undergone.

It has been a year since I started and I thought I would have swept through the whole house and minimized the shit out of it! Now I realize that this will take years to undo all the consumption of ‘stuff’ we have been, and will be, battling with. What we have a year later may not feel like a spotless, well-appointed hotel suite like I hoped from the outset, but it feels relieving to let things go. It feels empowering to constantly work towards living with less than we had before.

1 thought on “Our ‘Minimalist Family’ Home Update, a year later”