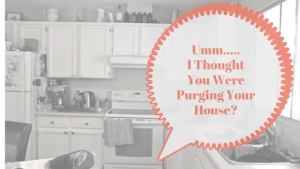 I initially wrote this big, long post on a six month update of how our living space looks since we started to ‘simplify’.

Then I put together some before and after pics from January, when we started, to now and showed them to Conor. It sucked. He just said ‘it’s not that good’. I needed to pour myself a drink for the sole purpose of crying into it. I mean, it looks almost the same around here as when we started! Even though we’ve gotten rid of truck loads of stuff! I’m sitting here muttering about disappointment, Conor has moved on to Brooklyn 99 and I just made a verbal pact to the couch that July is the month of getting done in the cupboards what is in my mind’s eye!

I don’t think I was naive and expecting a family of five would instantly have a spotless, minimalist home. Actually, yes, I absolutely did believe that. Just like I believed that my dad really took my favourite cat to a co-worker’s farm when I left for college. Gull to the ible!

When I write it out I FEEL like we’ve done lots. There was the basement, bathroom cupboards, kids toys, my closet, our bedroom, the outside toys and most of the kitchen went to fill my niece’s apartment. 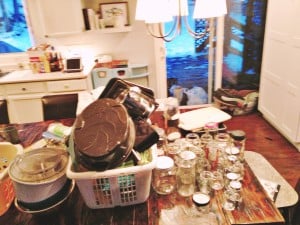 So sure, we’ve done the initial ‘sweeps’. Really, we’ve probably let go of the easy things: the broken, never used, multiples. I felt lots of satisfaction in seeing these things removed from my living space. Now I’m left to start making the harder decisions about the things I couldn’t let go the first time around.

If you came to my home right now and you’d see a holding pen in the basement of things that need to be sent to different places; a counter full of dishes (my domestic foe); toys on the floors; half the dining table real estate being held hostage by things that really belong in a dedicated space; and kitchen cupboards that look full to the brim.

I said I’d give myself a year to do this and boy will I need it. Things still don’t have the resting place they need in the home. Life is still lived in this house, and now that it is filled with a greater ratio of used:useless items, there is always something ‘in use’, code, there is always a mess in some room. However, despite the appearance, the mess does now seem more manageable with ‘less stuff’.

Anyways, I’m not here to complain about my messy house that is still too full of stuff for my liking, that’s what Instagram is for. I’m here to share my ‘downs’ with you in the ‘ups and downs’ of this process. As much as I’d like to wow you with amazing before and after pics at this stage….give you some snazzy genius tips….maybe even some free printables to help your own purging = BOOM! #lifehacked!!  It’s just not happening here. 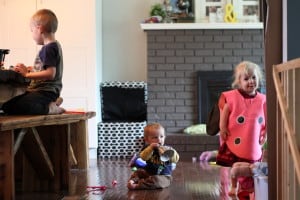 I can’t show you the results without honouring the heart changes I’ve made, the living that still goes on, the process that is teaching me so much.  Because sometimes, real life isn’t successful right off the bat. Sometimes it takes six months to cancel your IPSY subscription and let go of the ‘work clothes’ you never really liked anyways.

So if you drop by and see me sitting on the floor in my basement, muttering to my old collection of cassette tapes….you will know, I’m at Phase Two of the journey to live with less.

10 thoughts on “Umm…I Thought You Were Purging Your House?”