I remember her texting me near the end of her pregnancy. She said she wasn’t feeling many movements from the baby. My two pregnancies to her one put me in a place where I could reassure her. I told her what I knew to be true, babies get bigger and move less because there’s not much room. Over the next seven days she would have daily non stress tests and ultrasounds, the results were spotty with a pass here and a fail there. For any pregnant lady, this unknown was a painful waiting game.

Finally she gave birth and had her little boy in her arms. I met him, he looked just like his father, who was also a dear friend of mine. I fell in love with that laid back little baby in that warm knowing sense you feel about your friends’ children. I watched his parents, they were both settled with a shared peace, content to be a family of three. As I held him on my lap I could feel a ridge along his hairline. I’d never felt it in a baby before but every baby is different and I didn’t think much of it.

But the ridge didn’t go away.

He was so lethargic that it took him weeks to regain his birth weight. She would notice that he didn’t track her with his eyes.  She would soon realize she was also missing those long intent gazes that nursing babies give their moms.  Eventually she noticed her little baby wasn’t developing his left and right side equally. There would come to be assessments and testing. Accompanied by months upon months of speculations and specialists giving their best guesses. Doctors had determined that his brain didn’t grow fast enough to push out the plates of his head. There had to be yet more tests and assessments to determine what this all meant.

Finally, they would learn that while she was pregnant her baby boy had at least one stroke. It’s called perinatal stroke while pregnant, pediatric stroke in babies.

They had some answers. But now they had even more questions.

There really is no certainty or conclusion on what his life will be like as he grows…… Will he be able to talk? See? Walk? Drive? What kinds of therapies will he need? Will they help? How will other kids treat him? What special equipment will help him learn a basic skill like sitting up? How will this all be paid for? What would their family dreams become?….

This little boy will be two this fall. If you meet him he might steal some kisses and wink at you. For the most part he’s quiet in new settings. He stays in his mom’s strong arms. He has to be held, as the lowered function of one side of his body makes it unable for him to sit up on his own.

I have watched my dear friends wrestle with this diagnosis that brings so much uncertainty to their lives. Like most any mom, she had dreams of how mothering her kids would look. Every day she wakes up to reconcile what is required of her, what her child needs and what she can give. I have seen her sacrifice in ways that I never have, as a mom of three. I have cried for the shame she should never feel; for the confusion she should never have to bear; for the physical weight that is constant and necessary.   No matter how often I tell her that she is stronger than she believes, I can’t blame her if that sentiment just makes her more weary. 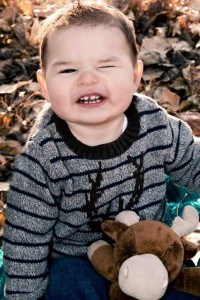 appointments, referrals, assessments, more appointments, therapy. She does all this on top of a job, trying to regain a foothold on being a wife, and reclaiming the woman she still is. As she has navigated the emotional and physical burdens placed on her, she is coming out a champion for her boy. After losing all of her certainty in what her family would look like, I see her as a hero for her family. And I’m so proud of her for now being ready to share her family’s story. To help raise awareness for fetal and pediatric stroke .

She told me I could share her story here. I can only aim to not belittle it with the limited perspective I have on what she has been, is going, and will go through. I can only aim to help spread the word on infant stroke. I can only aim to encourage us all to take the time to appreciate the loads that other moms may carry. More so, that we can help shoulder the burdens of our fellow moms with special needs babies in real, practical ways.