Skip to content
I grew up in a home where it was the norm to see boxes piled up against a wall; stacks of paper on every horizontal surface;  collections of mismatched items in nooks and crannies. ‘Clutter’ makes my whole body feel knotted just under the surface. For various reasons, ‘stuff’ took over my childhood home to the point where all the useable space was exhausted as storage.

Then I turned 18 and moved off to college. My belongings were limited to tacky posters and christmas lights strung across my dorm room.

Then I graduated college and my possessions were upgraded to things like milk crate bookshelves, a bed with no frame, handme down couch and that 4-seat pine dining set every 21 year old had because it was the cheapest form of saying ‘Hey, I’m a grown up’. My husband (then boyfriend) and I had little money, little possessions, but we did lots of living.

Fast forward ten years and we are in a house with more than enough space but also more than enough stuff. The creeping storage of boxes in closets all over the basement is giving me that same knotted feeling that comes with a team of trash talkers.

When I heard about minimalism this new year, it was like I was standing in a room piling up with my lifelong fears of living in cramped quarters and an escape hatch opened under my feet. I was chuted down into a new mindset, permission to get rid of anything that isn’t useful, beautiful,or tremendously sentimental. I know this isn’t for everyone. I know there are others who don’t feel an emotional burden caused simply by ‘things’ but, I do. To have a simple and clean physical environment gives me peace and makes me feel in control of my things rather than the opposite, which is what I saw with my childhood home. 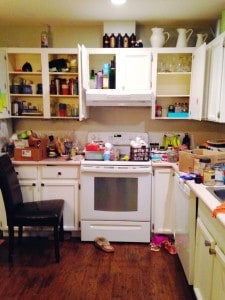 So I have slowly begun the process of what most people would call decluttering, but I don’t think it helps to call it that.

Why?…..
1. Not all of it is useless, cheap ‘clutter’. There are things of value and use I can mindfully pass on to people who will appreciate or need them.

2. Its more than ‘decluttering’. I have purged cupboards and rooms before only for it to become disorganized and full again a month or two later. Decluttering doesn’t always solve our ‘management’ of things, rather how many things we have in a given location.

I’m taking this year to go through my house in waves. Each drawer, cupboard, closet, nook. Constantly getting rid of the ‘extra’, the ‘never used’, the ‘wtf was I thinking?’ and moving them to new owners, the thrift, garbage or recycling.

Next step is to take the time to assess how the space is used to make sure it doesn’t become a dumping ground again (which has been a little tougher than I anticipated). And more than that, being thoughtful about what I bring back into my house.

You would not know this is my overall plan if you came to my house, there is a lot of chaos in this slow sort of stuff. But I think if I did it quickly it would all end up in a landfill because I would get too burnt out to sort and distribute it properly. 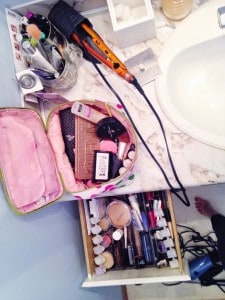 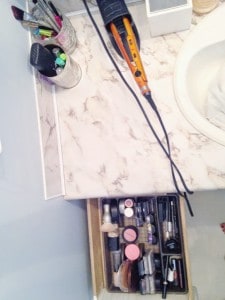 So far I have purged my closet, bathroom, kitchen and most of the kid’s items. I know I have more ‘waves’ to do through out these places but getting rid of the bulky things has made me feel like I’ve accomplished something. I don’t find I miss anything either.

I’m also having a real heart to heart with myself over why I have all these things in the first place. Not to mention the spazzy narration in my brain while I walked through the aisles of HomeSense the other day. It was like putting all I’ve read to practice. A very unenjoyable practice, in the short term, I know!

Are you doing any purging at your place? What has the process been like for you?

9 thoughts on “Til We Have Just Enough Stuff”