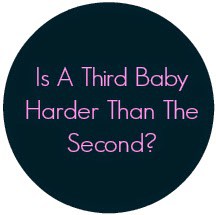 Although I felt anxious and overwhelmed as a new mom, my first born was a happy, adaptable baby who made us think we were awesome parents. High Five US! Now, let’s judge everyone on their crappy parenting because obviously have this one in the bag.

Then we had a second and realized we knew nothing about being parents. Sure she was a higher needs baby but, real talk, I didn’t want to leave my house and a portion of our budget was diverted to marriage counselling. It was one of the most anxiety-ridden and difficult times in my life, but I’m grateful for it now.

When we brought up the idea of a third baby some people said things like, “it’s like the third was always there”; “there will be so much love”; and “everyone finds their place in no time”. I promptly unfriended these people as they were obviously well-rested liars who developed Momnesia over the years.

Then we had our third (and last!), and in our case, found these expressions to be true. Sure, the personalities and age gaps of each kid dictated some of the difficulty but three seemed easier than two. Maybe because it wasn’t a small dependent toddler and newborn vs me. Now it is two ‘more’ independent toddlers vs naps and a newborn who sleeps in my closet. I don’t have to monitor the older two as closely to make sure they aren’t eating paint and dumping oats down the heating vent. They still do it, now I just LET IT GO! So obviously I’ve loosened up on my ‘Rules for Perfect Parents‘. The older two also have each other as frenemies. The onus is not all on mom to be a playmate and entertainer. Example, I could be in one room putting baby down and listen for alternating screams and grunts between the older two to know they were making a mess and therefore still alive.

This is what was true for me, but I wondered if other moms had a similar experience. I asked some fellow Canadian Moms what they found to be the easiest and hardest transition of adding a new baby to the family…..

– I think the first two were the hardest: transitioning from no kids to one kid because everything is new and you’re learning so much about being a parent and taking care of a baby….{Bonnie at Koala Bear Writer}

–  For us, 0-1 was the hardest but he was also a very high needs fussy baby so the learning curve was steep and shocking! {Andrea at Mama in the City}

– I only have the one almost-1.5-year-old, and that has been a hard enough transition for our family. There are of course other factors to the decision to stop at 1 (I originally wanted 3 and hubby 2), but the immensity of the transition was so hard it is a big part of what brought us to that decision. {Hannah at The Big To-Do List}

– …and then transitioning from one kid to two, because you’ve adjusted to parenthood and taking care of a child but now you have to manage an older child while still doing everything for a toddler. That advice about “sleep when the baby sleeps” which worked so well with your first probably won’t work with your second!!! I think I only got naptimes coordinated once for all three of us. {Bonnie at Koala Bear Writer}

– The hardest transition was adding #2 I think… I had a lot of anxiety during my pregnancy that baby 2 would take away from #1. I didn’t know about love multiplying or how much I would adore seeing my son in the role of big brother. {Sarah at Sarah on Purpose}

#2 was an easy relaxed kind of text book baby and it was super easy adding the 2nd baby to our family. It was really no stress at all after having the high needs fussy one first. {Andrea at Mama in the City}

– I have 3. They’re 8, 6 and 2 The addition of the 2nd baby was a lot more challenging. My oldest was only 24 months when my 2nd was born, so he still needed a lot of attention and assistance from me. Plus, being a toddler, he had a lot of temper tantrums, which was hard to deal with when I was so sleep deprived from waking up with a newborn. That was a tough time! {Megan at Food & Whine}

– I found going from 1 to 2 kids the easiest because the parenting thing wasn’t a mystery anymore and I found it a lot easier to handle a newborn with only one other child. {Deb at One Little Project}

– I think adding #3 was the easiest… I was already an established mom… I knew that adding more children didn’t mean less love for the others! {Sarah at Sarah on Purpose}

– Transitioning to three seemed so much easier, but my third is almost three years younger than my second, so my oldest two could get them selves dressed, get ready to go out the door, feed themselves, etc, which freed me up to take care of the baby. Oh, and the oldest two could play together or watch a movie if I desperately needed a nap with the baby. {Bonnie at Koala Bear Writer}

– Easiest transition was number three because I was emotionally and functionally already a Mom, but my bigger kids knew what “no” and “wait” meant {Jac at Two Fun Moms}

– (I have 3. They’re 8, 6 and 2). Going from 2 to 3 was the easiest, and I think for us the age difference had a lot to do with that. The boys were 4 and 6 when their baby sister was born, so they were old enough to do a lot of things on their own and even help out a little with the baby sometimes. They were also already in school so I had time during the day to spend with the baby one-on-one. {Megan at Food & Whine}

– I found going from 2 to 3 extremely challenging! Here’s my post about it {Deb at One Little Project}

-….But it was oh so hard going from 2 to 3. Now, things are great.
{Ashley at Forgetful Momma}


|| on three to ‘officially immune to caffeine’ ||

– Hardest transition was #4 because there were JUST SO MANY KIDS and my toddler was still very needy as well. We’re still working on this adjustment! {Jac at Two Fun Moms}

– ……After that it was easy with number 5 being the easiest add on. We will be welcoming a newborn foster baby tomorrow and I expect the same easy transition (but feel free to ask me next week. {Catherine at  Flip Size, TOTS Family and TOTS Business} I love you Catherine, clearly you are nuts.

How about you? What has been your easiest and hardest transitions in having babies?

5 thoughts on “Is A Third Baby Harder Than The Second?”