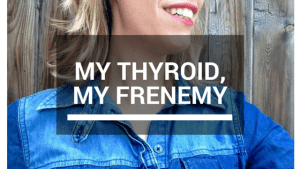 Over the past six years I’ve watched my body billow with change, not just with pregnancies but also with my thyroid. Moving from goiters, Grave’s Disease to hypothyroidism. There has been a responsive journey I’ve already been on, and a proactive one that I’m hoping to start this summer.

It all started with a thyroid gland. The gland sounds harmless enough, after all, it is shaped like a bowtie so you know this gland isn’t getting any respect by its anatomical co-workers. But it’s an important gland, it’s spewing out the thyroid hormone which helps regulate your metabolism, growth, and maturation of your body. Important stuff! Improper functioning of the gland can cause a host of disorders and problems. And they say 1 in 10 Canadians have a thyroid condition.

In May 2009 a naturopath gave me an initial assessment and sent me with instructions to ask my GP about my thyroid. The slew of testing began and results were showing a large bulge in the gland (called a goiter) and a diagnosis of an autoimmune disease called Grave’s disease resulting in too much thyroid hormone messing up my sweet flow.

Part of me was relieved about this diagnosis. From my teenage years on I just felt ‘off’. I had all these vague symptoms that didn’t fit a neat little box of ‘illness’. Doctors were quick to pen a prescription for anxiety medication, sleeping pills for insomnia, stomach relaxers for bowel problems. Then there were the ‘you need to eat more’, ‘let’s check you for diabetes’, ‘no you can’t wear socks and sandals’ (scoff, right!?). My heart rate was usually around 100bpm. I constantly felt mildly-out of control and disconnected from my body. Like a hummingbird who had an IV of Mountain Dew. Yet, exhausted at the same time from my body being in overdrive. I just accepted this as normal. It was just too hard to explain to friends or a doctor as these symptoms are all subjective to my experience alone.

The other part of me was in distress over the diagnosis. Doctors were rambling over my head about things like radioactive iodine, biopsies, thyroid storm (not as cool as it sounds, mostly because it doesn’t include Mark Wahlberg as supporting actor), heart palpitations, eyes bugging out of my head and trouble getting pregnant. It was clear my thyroid and I were total frenemies and I was all ‘what gives thyroid? I thought you were on my side!…and you call yourself a gland?!’.

I was a newlywed when I got this diagnosis. We were trying to get pregnant. We weren’t getting pregnant. After all the preliminary testing I saw a specialist, an endocrinologist, in the Fall. He wanted me to do radioactive iodine to buzz this goiter off my thyroid which was ‘four times the normal size’ and reduce the mass of my gland – therefore reducing the amount of hormone made. He even asked me if people commented on my thick neck, like it was blatantly obvious I had this goiter. I was all, ‘well my husband’s pick up line when he met me waaaasss ‘hey baby, is that a goiter or are you just happy to see me?’ ‘. Regardless, I was now self-concious about my beefy neck and started wearing scarves a lot more often.

So to sum up the long story (which is here), I didn’t go through with the radioactive iodine. I wanted to focus on getting pregnant – not delaying it. I believed that God would bring me healthy babies without medical intervention. He did. I write this six years later with three healthy children. I had no idea how things would pan out, or when, but I knew I had to hold on to this promise.

With that said, I am still on a synthetic thyroid hormone each day to maintain the proper levels in my body. I have remained on it through pregnancies and nursing and now that my nursing days are in the final leg, I hope to wean my body off the synthetic hormone and restore my natural levels.

I’ve read of many others who have done this, and I know it will have a lot to do with exercise and diet. So, one, I WILL complete the couch to 5K app this summer! And two, let’s hope my thyroid is as big a fan of waffles as I, because if she (yes, my Thyroid is a she!) makes me give them up we are no longer BFFs and I clearly can’t get a return on my engraved “I’m Gland Your My Thyroid” pendant I recently bought……