Happy Thanksgiving Monday! Today is a day when kids get to skip preschool, rustle through giant leafy nests and we get to deal with the hangover our kitchen just endured.

Or….maybe it’s a day to hang in PJs, make waffles, send your husband passive aggressive texts about using the last of the maple syrup and deal with the hangover your kitchen just endured. 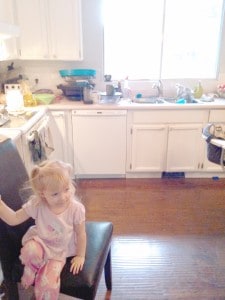 Yesterday Levi was pale, clammy and couch-bound. He said his head and tummy hurt but he wouldn’t let me offer him any help.  So I stress-baked. And took an indulgent number of flour-dusted selfies. 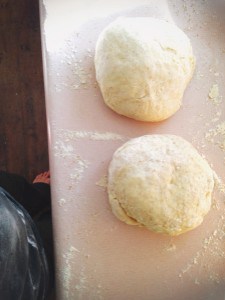 I don’t bake much, when I do it goes straight to my head and I think I’m pretty much in the running for Homesteader of the Year.

Later in the day Levi said he was feeling better for Friendsgiving/Soupsgiving at my mom bestie’s. It was a delicious, simple and rose-soaked night.

But I forgot the Thanksgiving Journal.  So I filled it out this morning, asking Sophie’s and my kids what they are thankful for. 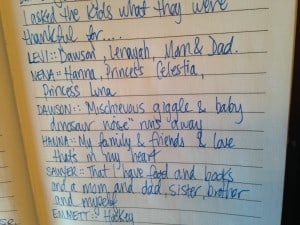 Now I’m not SAYING I have a favourite child today but let me add that as I was writing in this book, Dawson climbed up and was standing/cackling on the living room side table and Lenayah shoved her used kleenex back into the box…..so…..two might be tied for second place today.

I can joke about favourite children and messy kitchens and running out of maple syrup (even though it happens like all the time!). In retrospect, this life is not what I had planned. I thought I would struggle less with marriage, motherhood, my home life. I also never expect to genuinely settle into who I am and find a new career path. It isn’t what I planned, it is way better.

I told Conor recently that I was thinking about the Outlander series (obviously) and that it had made me so grateful to be born in this country, in this era, in this family.  Of course we then reviewed, ‘it’s just a book Shawna, it’s not real life Shawna’  to which I replied, ‘You have two jobs! One, take out the garbage and two, to love me like Jamie loved Claire!’.  His lips curled up with amusement, but clearly, his eyes said “Aye Lassie”.

But truly, we are all so blessed. We live in a time and place where women regularly survive childbirth, children live longer, healthier lives, men aren’t going off to war or having duels in the streets. Plus we have triple ply toilet paper! Blessings abound!!

Since learning about ‘minimalism‘ and deciding I wanted to live with less than what I have, I am acutely aware that it is still so much more than that the majority of the world has.

A couple of months ago I was strollering through the neighbourhood and I was approached by a young woman. She had long knotty hair, smelled like unwashed laundry and wood stove smoke.  She was sweaty, riding an old blue bike with a garbage bag in her hand. She asked if  I had any bottles because she was collecting money for groceries. There were rocks in my stomach for the rest of the day. How do I sit here and complain about the price of quinoa flour when I can more than afford it as a staple? How do I ever think what I have isn’t enough? How do I ever want more? 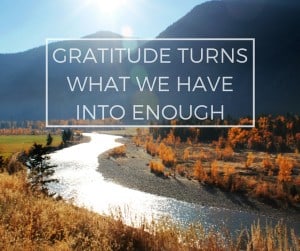 It is a twisted thing to be a privileged white woman complaining about being privileged. But I know now that feelings of discomfort and discontent are the first stages of change….and complaining needs to lead to change or it is in vain.

This Thanksgiving has been a different one for me. In the past, I would have taken the day to be thankful for health, and home and family.  Now I can look around at an abundance in my home and in my things. I can wrestle with the feelings I have around gratitude, and storing up ‘stuff‘, and where I put my security.

I can get some more boxes and let go of more things.

I can work towards living with less indulgence.

I can pass on the excess I have to someone who would need it and appreciate it.

We live in a mindset where more becomes less, sometimes with the simple passing of time.  We gloss over the sentiment ‘less is more’ when it doesn’t suit us. It is counter-cultural to seek out less when you could work an overtime shift and have more.

But less of the excess makes room for the more important things.

Like warm waffles with desolate drips of maple syrup, kitchen dance parties and turning the couch into a jungle gym….. 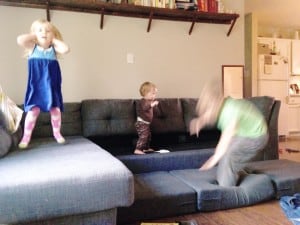 2 thoughts on “When Thanksgiving Kicks You In Your Privileged Butt”