Empathy with other adults can feel differently than it does between us and kids. This is often because our emotions are used as currency, as power. And also because we are raised to stigmatize negative and uncomfortable emotions.

So why should we make an effort to master empathy? How can it really improve our connections in our marriage and friendships?

The full transcript is at the end of this post.

In this podcast episode I’m sharing: 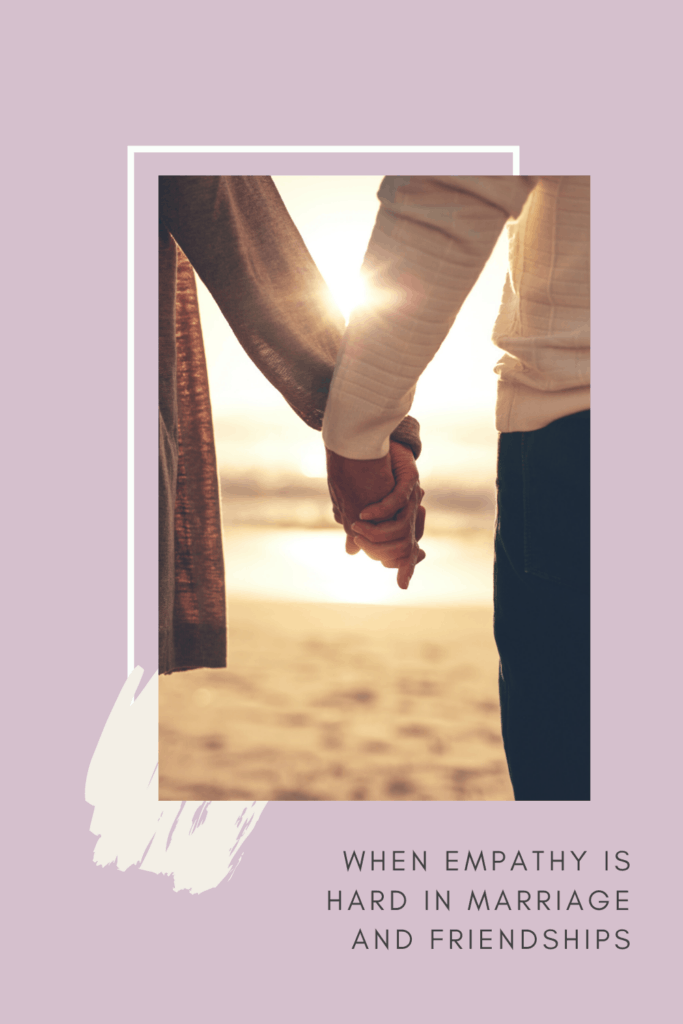 In the last episode, we talked about empathy, the two types of empathy, emotional empathy, and cognitive empathy, having empathy in our relationships, specifically in parenting. Being empathetic parents how it’s not a form of enabling bad behaviour, but a form of creating a connection point and a way of changing the relationship dynamic where it’s the one that handles tough emotions together, rather than punishing them, avoiding them, resisting them or reacting to them.

Today, I want to continue on with empathy, as we can use it in our marriage and in our friendships. Empathy is having an appreciation, almost feeling the feelings of someone else.

Empathy is saying, I know what you’re feeling, I can see that I can understand that. It can go even further into compassion, where I have compassion for how you’re feeling, but empathy in a marriage, what does that look like? Because often, we have feelings for what we think their feelings are, do you know what I mean? Like we assume the worst so that they’re acting this way. And it means all these horrible things. And, and they’re just doing this because they’re selfish and, and all that matters to them is work and all of these other things, we fill in the blank with the worst-case scenario.

And this generation that we’re in many of us adults, now we’re raised to stigmatize negative emotions, to be uncomfortable with them. So if my partner is uncomfortable with something, he’s in his own mind, fighting that discomfort, that stress, and I am uncomfortable by his discomfort and my own discomfort that I’ve caused by my own thoughts about the whole thing, we’re both in a stress mode, we are ready to fight, we’re defensive or offensive. Empathy is really hard in the situation.

In marriage, empathy can look like a lot of things. But for me, it often looks like me asking, why would this be hard for him? There was a lot of years where I thought he’s overworking. He’s working too much ‘All that matters is work’. And I can ask myself why and I come up with these negative assumptions. Or I could ask him, ‘why is it so important to you?’, I might learn he feels pressure to provide for us and at a certain level, or that he feels like he’s just really good at he doesn’t feel good at other things. Like I can actually have empathy for those sentiments, right? I can relate to those feelings. If I was feeling those things, I would probably overwork, too if I felt that way.

To me, that’s empathy.

So it means asking, What might their view be on the world on themselves on their place in it, and we know enough about them often to know how they’re raised, what’s hard for them, what comes naturally to them. And not to use this to throw it back in their face. But to say, okay, when you’re acting this way, it makes sense that this is what you’re thinking and feeling.

So sometimes, we just need this cognitive empathy, right? That I explained in the first lesson where we’re just like, okay, I can rationalize, I can use my human brain to predict what your human brain is experiencing what you’re thinking and feeling like, the emotion isn’t quite there. And sometimes we can bring an emotion to this and we can start to move with compassion. In some cases where our partner has been really struggling with something we could say. So sorry, you went through that, like we can be moved to compassion.

Without bringing empathy into our relationships, we will constantly invalidate our partner and the defenses stay up, right? Because we feel like we’re not on the same team. We’re thinking the worst-case scenario about each other. We’ve got a lot of defense and offense going on. Empathy helps us to remember that we’re on the same team. It helps us to stop. It helps us to ask ourselves what’s going on with us? what we think from a loving place is going on for them. Maybe we can even ask them, we can get curious. We can listen to them.

For me in a marriage relationship. Empathy can be really hard to give, because it’s also hard to receive it. We really need to give them The to ourselves in order to give it to others. It’s just like filling up your own bucket, right? Instead of looking to someone else to fill it up, we can’t outsource compassion and understanding of ourselves. But we can still create a culture in our marriage, where empathy is part of how we communicate. So remember to give it to yourself as well.

Empathy is a subject that comes up most often with family and friends. I don’t think we talked about it enough for kids in marriage. That’s why I wanted to touch on it. But when it comes to family and friends, empathy has its role as well. And it’s really popular right now on the internet’s because I went to the end of the internet and back. So I can tell you, there’s a big comparison between empathy and sympathy. And the more I tried to research it, the more I was confused that are they that different? And what I am seeing the differences, as I’ve read about is that sympathy has a hierarchy to it, where it’s like, oh, I have it good. And you don’t right now.

So there’s this almost form of judgment right of I am up here and you’re down there. Oh, poor you. There’s this pity to it. And that’s usually the negative connotation that sympathy comes with, when people say, have empathy and not sympathy. And empathy has more equality to it. It’s like, well, you’re not doing well, right now I’m here with you.

As a coach, we hear a lot about this term holding space, holding space for your client holding space. For others. It’s something we bring into our relationships. It means sitting there with them. And having compassion allows us to hold space, the word compassion means to suffer with to suffer alongside. This is really tricky, right? This is tricky to do in friendships because we want to see the best-case scenario, offer them positive things to think about, offer them a way to fix it, offer them advice, offer them support.

Holding space doesn’t really come naturally to us, especially if we are people who have often found our value in showing up in fixing things in finding the positive spin on things. This is maybe a way that we’ve been raised and shown to show up in the world. And that’s going to come so much more naturally to us. But it might not always make our friends feel validated and seen and judgment-free. Which when we’re dealing with a negative situation or negative emotion, we’re already doing that to ourselves anyways.

I just want to acknowledge all of this, that it is hard to hold space, it is hard to have empathy, when you feel worn out. It is hard to want to really help your friends and take action and find a place where you can stay still show up for them and be like practical supports for them. Without also dismissing or judging their experience. So this is all tricky. But it still can be a conversation you bring into your friendships.

And I want to wrap up with what to do with empathy. So empathy is like a scale on one end, if if we’re just using cognitive empathy, and just thinking about what someone might be going through, it can be cold, right, we can detach from it. And that’s might be really helpful. Sometimes we might need to detach our emotions from it. And then the other extreme is emotional empathy can be overdone. It might lead to commiserating to stepping in when it’s not necessary or appropriate.

And we’re gonna aim for, as with most situations, somewhere in the middle, where we’re making someone feel seen, but not detaching from them, still extending that connection support, where we are allowed to offer support without it being overtaken by an emotional response. Like, have you ever known someone who just flew off the handle when you hurt someone close to them that that’s an example of extreme empathy, where now their anger has kicked in, and they’re going to take action, they’re going to write this wrong, that empathy can have this spectrum aiming somewhere in the middle. And remembering at the end of the day, empathy is important.

It’s important at changing our relationships.

And I always come back to this, you know, that feeling you have when you know someone wants to change you. Like maybe you had growing up as a kid, maybe you have it with your partner, you just know there’s something about you that they don’t like they don’t want it to change. It sucks, right? And often when we’re experiencing that it makes us stand our ground. It probably even makes us villainize that other person for probably thinking that we’re assuming, right? All of this creates a disconnect. It makes our relationship unsafe, and when it’s unsafe, it cannot thrive.

Empathy is the solution for that.

Empathy allows us to stop trying to fit people into this checklist we have of who we want them to be. Just stop that and see them see who they are. Let them be who they are. Practice loving who they are.

Overall empathy just really takes us out of this view we have on what others should be and do and how the world should be. And it allows us to be open to all of the other experiences, all of the other ways of being that are actually currently happening.

And if support is something that you’re looking for right now, if you’re tired of trying to just figure this out on your own. If you feel like you’re backtracking if you feel like you’re not making headway, and you want someone to walk you through this, someone who’s been there someone who understands someone who is neutral and not emotionally invested in what you do or don’t do in a given day, then get yourself a coach and maybe you think that I could be the coach for you. I would love it if you would contact me because a coach is someone who brings awareness into your life so you stop scrambling for control of everything. A coach is someone who brings clarity into your life so you aren’t spinning and just putting out fires, you’re setting some clear direction on what changes to make. And a coach is someone who helps you take effective action empowered action, moving you forward instead of just exhausting you out.

If that’s something you’re interested in, you can find more information at simple on purpose.ca.

And as always, I enjoy spending this time with you have a great week.